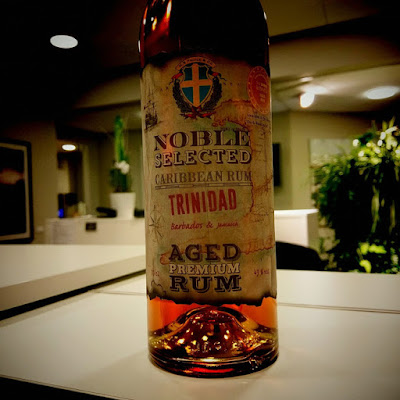 The blend contains Trinidad rum aged 3 and 5 years, Barbados rum aged 5 and 8 years, and last but not least "young" pot still Jamaica rum. After blending, the rum has rested in steel tanks for a while until bottled at 43% abv, which is in between the other expressions at 37,5% and 50%.

On paper this rum sounds very promising, and as the press release says – it's combining the best of two rum worlds, the Spanish and the British – so what could go wrong?

Nose: very mellow and soothing, with prominent notes of caramel fudge and vanilla in the front with some light oak, toasted almonds and ripe stone fruit – maybe even a hint of banana – fighting for attention. Mouth: soft and medium-bodied, with a rather dry cinnamon-spiced tingle before transforming into an array of familiar aromatics like caramel, raisins and some brighter citrus notes, a hint of arrak and dark chocolate with a sudden yet warming and satisfying fade of oak, tropical fruit and vanilla.

Cocktails: Naturally for me, the first cocktail that comes to mind is Mai Tai (60 ml Noble Selected, 30 ml lime juice, 15 ml Pierre Ferrand Dry Curacao, 7,5 ml Beachbum Berry's Latitude 29 Orgeat, 7,5 ml simple syrup, shake with crushed ice, pour unstrained into a double old fashioned-glass, add more crushed ice and garnish with spent lime shell and a sprig of mint) and the rum offers just the right amount of funk and balance to stand out against the other ingredients and make a nice drink. Next up, a Mulata Daiquiri (60 ml Noble Selected, 15 ml lime juice, 15 ml Cartron Cacao Blanc, 5 ml simple syrup - shake with ice and double strain into cocktail glass) and the cacao liqueur accentuates the spice and chocolate notes of the rum in a really nice way. Last but not least a Rum Old Fashioned (60 ml Noble Selected, 2 dashes Angostura Bitters, 5 ml simple syrup, orange zest - stir all ingredients with ice until desired dilution, strain into ice-filled Old Fashioned glass and garnish with orange zest) and it's a tasty drink even though the rum is not really powerful enough to make it all the way.

In conclusion, Noble Selected Aged Premium Rum is a rather tasty, elegant and versatile rum – maybe more suitable in cocktails than on its own but I'd prefer a larger amount of Jamaican rum in the blend. It's somewhat too easy going for my taste but definitely good value for money and should be considered before choosing a similar, more expensive rum. Noble Selected Aged Premium Rum can be ordered in Sweden from here.