This year Peter F. Heering celebrate the Singapore Sling's 100th anniversary, and on September 22, the finals of Heering Sling Award 2015 took place at Leyenda in NYC. Ten bartenders from around the world competed with two signature Slings each, and when the jury (David Wondrich, Joaquin Simo, Julie Reiner, Sam Ross, Andy Seymour and Tony Cecchini) had reached a decision, they announced Swedish Christoffer Johansson, currently at Pixbar in Gothenburg, as the winner - congratulations! I did an interview with him a while back after he won the Swedish finals of Bols Around the Nordics competition, and it's obvious that he has continued to grow as a bartender.

Christoffer together with the four runner-ups (Matthias Aso - Zeta Bar (Sydney), Richard Grimsey - The Classic (Limavady), Hungie Fong - Origin (Hong Kong) and Jeremy Lafrance - Le Calbar, (Paris)) will now travel to Singapore to meet the charity organization Panthera, since part of the competition was to raise money from sales of Singapore Slings in order to save the world's tigers.

If you want to try Christoffer's winning Sling, here's how to make it: 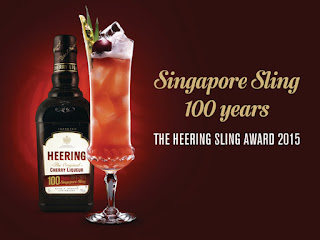