The number of female bartenders in Stockholm is slowly increasing, and one who stands out is Nathalie Haglund, a talented and passionate bartender with several irons in the fire who you can find at newly opened hot spot Le Noceur - well, if she's not in Mexico of course. 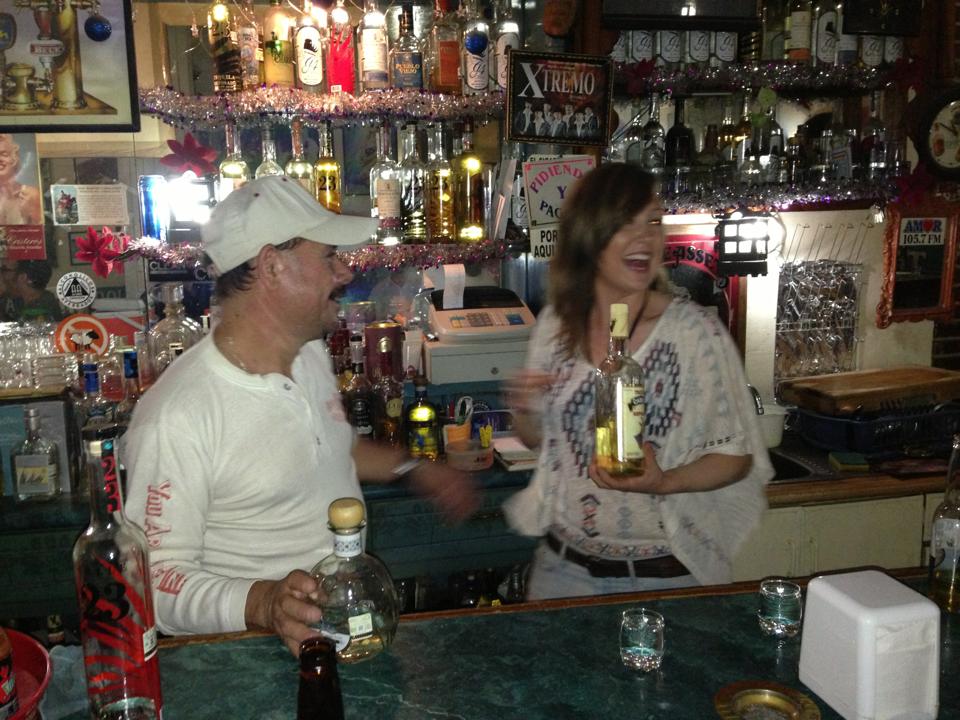 What made you pursue a career in bartending and how did you get your first
bartender job?

Everything started when I was on my way to become a professional dancer, but the schools are really expensive so I had to find a way to pay for it. At that moment I lived in Nyköping, a little town one hour south of Stockholm, and with some experience as a waitress I went to a small and kind of dark rock bar and applied for a job behind the bar and what did you know ... they gave me a chance.

So I studied dance during the days and worked as a bartender during the nights and it didn't take long until I realized how much I loved flavors and the combinations between them.

When my knees broke down and I had to quit dancing I started to work in a nightclub as a bartender but really soon I understood that it wasn't my scene so I moved to Linköping and got a spot in the team at Bishops Arms where I got a lot of knowledge about whisky and beer.

It was at Bishops Arms my eyes opened up to a career in bartending and to educate myself. Then I decided to move back to Nyköping and to study at International Bar Management School founded by Hans Bihl. One of my best decisions!

Where are you originally from, and how did you end up at Le Noceur?

Haha, this is a tricky question since I have move around a lot but I would like to say that I am from Linköping. Ola Carlsson, now bar manager at Le Noceur and former bar manager at Häktet where I did my first intern period from the IBM school taught me a lot about cocktail knowledge and the industry in general. After my graduation from IBM I worked at the summer bar Mr. French in Stockholm, and later that summer I went on a bartender industry trip to Mexico, and by the time that I came back I started to work for the tequila and mezcal company AliasSmith. When I heard that Ola was the new bar manager at Le Noceur I stopped by to talk some tequila and left with a job. So I would say a mix between luck and that I like to have him as my manager. :)

Can you describe the current cocktail concept at Le Noceur and the story behind it?

The concept is a flirt with speakeasy but with a modern twist, that is basically a place that is darker, industrial with a lot of focus on the bar and cocktails where the music is not taking over and either if you just quit working or been out dancing you can always come and sit down for a cocktail. The word Le Noceur means “a person that sleeps late or not at all and like to stay out late and revel or party”.

You're also working for TequilaSpirit, what's the company's aim and how do you contribute?

Yes I do and I have been a part of the team since I came home from Mexico last year so for about 7 month, so I´m still pretty new to the game! We at TequilaSpirit work hard to spread the Mexican culture and their amazing spirit that goes back more than 1700 years, and the indigenous people of Mexico. We want people to know the culture, spirit and the handcraft behind the fine liquid that have been with the humans for a long time and that is where I come in. I work as a salesperson towards bars and restaurants mostly here in Stockholm but have recently started to take trips around our small but large country.

Every month we have a tasting with tequila or mezcal with different themes that me and my partner in crime Björn Kjellberg organizes. A little secret that I recently announced is that I am going to Mexico for TequilaSpirit in the middle of June to work on a lot of different tequila and mezcal distilleries so that is really going to be amazing!

Oh, I would say Häktet and Le Noceur regarding cocktail knowledge, because of the people I work with and how they teach. TequilaSpirit as well but in another kind of knowledge and skill and it can many times be hard to do two different things, but I think that I someday will succeed to combine them. Which is your favourite and least favourite drink to make and why?

My favourite drink to make, hmm.. I believe it is when a customer wants a drink or a twist of a classic and I'm a little insecure. Because then I need to go back to what I have learned and every time I evolve as a bartender. I actually don´t think that I have a least favorite to do but if I have to pick one it have to be Aperol Spritz, and why? Because I´ve done it too many times during a short period of time.

How would you describe the perfect customer?

Simple! A person that is friendly, open minded and is not scared to try new flavors/cocktails.

When I was working in the nightclub there was this guy and if I remember this right he ordered a Mojito but instead of white rum he wanted Jägermeister and a splash of Red Bull instead of soda. Are you wondering if this is good, I can´t remember but I can bet all my fingers on no!

That I never stand still, both Le Noceur and TequilaSpirit always push me forward to reach new goals and it makes me work hard, but one of the things I like most is of course to meet a lot of new people all the time, love it!

I would say that it is that even how stressful things gets I always work very clean and with a smile, you don´t want the customer to feel stressed.

The little I have left I try to hang out with my beloved friends!

I love stiff drinks so often Manhattan or Rosita. But if I´m going to drink cocktails with more citrus I prefer 21th Century or Corpse Reviver #2.

Haha, a lot of tequila! But of course also the usual suspects: Campari, bourbon, gin, rum, vodka and vermouth.

I think that we can expect two "new" trends where one of them is already in the beginning of spreading and that is table service, costumers love it! For a long time in the Stockholm bar scene the cocktails have been more about what the bartender want to do or like less about the person on the other side of the bar and that is starting to change now. I believe bartenders are starting to have more fun with the cocktail menu and care more about the customer.

Which are your favorite bars/bartenders around the world and why?

Unfortunately I haven't had time to travel around that much yet but if I have to pick one bar in the world it has to be that little pop-up bar in Thailand that I don't know the name of but they served awesome Zombies!

In your opinion, how do bars in Stockholm and Sweden compare internationally?

It´s hard for me to say but I would say that the Stockholm bars is up-and-coming internationally, today a normal bar/restaurant do really decent cocktails.

Last year you entered the Auchentoshan Switch cocktail competition; do you have any plans to compete more in the future?

Yes I did and I was really exiting but unfortunately the competition collided with my trip to Mexico so I had to cancel the competition but I love to compete so you will see me a lot in the future.


What’s your opinion on cocktail competitions in general?

I think they are great, it´s an opportunity to meet a lot of new interesting people and it´s a chance for me as a person and bartender to evolve.

I get inspired by a lot of persons around me and the environment, and when I am in the progress of coming up with a cocktail I think more of the season as well, what flavors I believe go together, keep it simple in the beginning and elaborate later.

I am mostly proud of where I am right now; I am on my way to Mexico and this amazing journey and to be a part of the team of Le Noceur. I´m so happy!

Where do you see yourself in five years from now?

Traveling around the world while working with tequila and as a bartender.

Stir and serve in a coupette with lime zest discard.

I start by adding a large orange zest in a ancient old fashioned glass and a Chinese anise on the top. On the side I have a ancient silver can and plate, just to get that nice feeling. For me it also looks really smooth and clean just like I see Auchentoshan. I stir all of the ingredients in a stirring glass and then double strain it into the glass and it's ready to serve.
Labels: drinks interview
Location: Brunnsgatan 1, 111 38 Stockholm, Sverige