Fredrik is yet another talented bartender working in Stockholm, and his skills can be put to the test at the Grill restaurant bar which recently was transformed into the tiki bar Koko-Mo. He's currently preparing for the finals of ABSOLUT Invite here in Stockholm in May, where he will compete against two fellow Swedes as well as some of the best bartenders from the rest of northern Europe - good luck!

What made you pursue a career in bartending and how did you get your first bartender job?

It all started on the hotel and restaurant school up in Malung/Sälen, then I moved back to Borlänge and started as a waiter. The restaurant that I worked at got several nightclubs so after we closed the restaurant I just walked upstairs and continued. At that moment I really didn't think that I was still doing this 8 years later.

Where are you originally from, and how did you end up at Grill?

I was born here in Stockholm but I grew up in Borlänge. I lived in Åre for about 2 years and didn't want to go back to Borlänge because I couldn't make any progress there anymore and I was looking for a challenge. I contacted all my friends in Stockholm and told them I was looking for a bartender job. A few days later the restaurant manager at SMAK called me and told me she got a bar manager job that she thought would fit me pretty well. And it did, SMAK has a really small bar so it was a good start to enter the "cocktail world". After two years at SMAK I felt that I wasn't making any progress, then I got the offer to start as a bartender at Grill.

Can you describe the current cocktail concept at Grill and the story behind it?

The concept at Grill now is Tiki, we wanted to get rid of the speakeasy feeling that was there with all those fancy NK shirts, and the stiff feeling around the bar. And my colleagues missed the feeling from the previous Hawaii concept. And what's better than Tiki?! Now we have a shitload of Tiki interior, Hawaii shirts, pineapples, coconuts and a lot of rum !

Considering the fact that I came from the nightclub and after ski bars, the first big step and challenge was SMAK. I learned a lot about how to manage a bar and to create cocktail lists, I visited a lot of bars in Stockholm and learned a lot about the cocktail scene. And since I started at Grill I still keep learning a lot everyday. 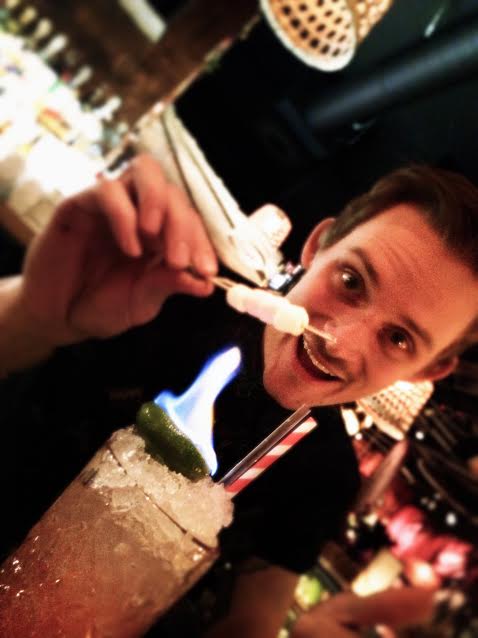 Which is your favorite and least favorite drink to make and why?

I would say something that I created by myself.
Vodka and Coke.. Seriously!? Why do people even drink that?

How would you describe the perfect customer?

The perfect costumer is someone who really likes spirits and who is NOT afraid to try something new!

”Something good”. Every single day.. Do you seriously think I'm gonna make something disgusting?

That I work with something I really enjoy, it's always a lot to do, so much to learn and it gets as fun as we make it !

I'm not sure if I'm proud of it but I always notice what happens around me, what people around me order from my colleagues, so I know what people are drinking or what they want to drink. Maybe I've just got big ears.

I love snowboarding, unfortunately it's not that often now when I live in Stockholm. I also spend a lot of time with my dog Fläsk (Pork), and when I'm not I often go out for a piece of food and something good to drink.

A little bit of everything, the newest bottle I got is a 500 ml bottle with a lot of Chinese letters, the only thing I can understand is that it is 43%, 500 ml and taste like shit.

I think the fun drinking is coming back, you can see it in a lot of bars. Some colored paper straws, funny glasses and so on. And I really hope it's coming back because it makes people more fun!

Which are your favorite bars/bartenders around the world and why?

I haven't been around so much to discover bars in the world, yet. I went to London over Christmas, but got really sick those days the bars were open… I do have a really good experience from Buck and Breck in Berlin.

In your opinion, how do bars in Sweden compare internationally?

Really good I think, we really like what we are doing and all bars here in Sweden want to be the best.

You're one of three bartenders who will represent Sweden in this year's European finals of ABSOLUT Invite, please tell me all about the Swedish qualification round and how are you going to prepare for the competition in May.

The Absolut Invite was a really fun and nervous 12 h day with mixing, sensory and knowledge tests. I'm really looking forward to the two day finals. I'm gonna do what I did in the qualification but even better!


What’s your opinion on cocktail competitions in general?

It's pretty new to me but I think it's really fun, every competition is so different from each other. And it's always a good vibe between people.

I usually don't think ”twist”. I think of things that I like and would work well together, I love to come up with weird ideas.

Hard to choose just one.. I did one at SMAK that is called Liquorice that I am really proud of with a dry nice taste. It was lemon vodka, Strega, Lemon, egg white and a liquorice powder. I'm proud of that I've come this far in such a short time.

Where do you see yourself in five years from now?

I think I will be 31 years old and do whatever I think is funny. If it`s behind a bar or on the other side, I don't know. 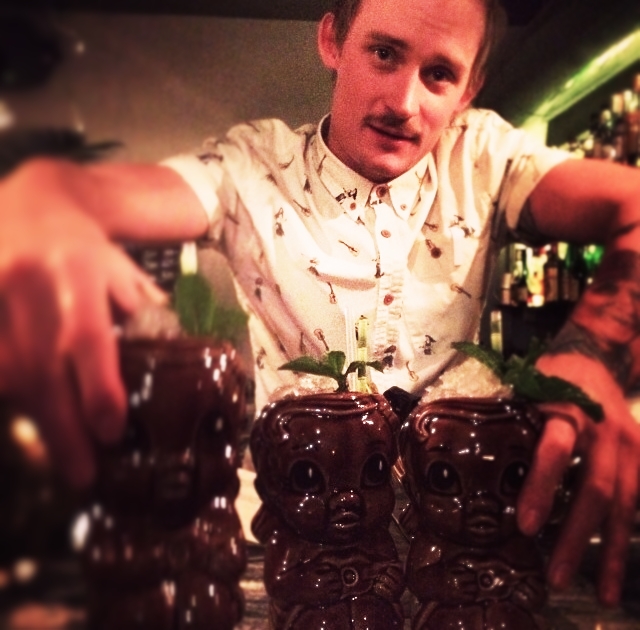 Pour everything in a siphon with three ice cubes, fill it up with gas, and shake a few times. Serve in a little glass cup, garnish with a burning coquito and dried mint leaves!
Labels: drinks interview
Location: Drottninggatan 89, 104 30 Stockholm, Sverige