Skvaderns herbal liqueur is made by Sankta Anna Bränneri, the same small Swedish distillery that brought us Valkyria Absinthe a while ago. Based on a mythological creature, a mix between a hare and a grouse, claimed to have been spotted by a hunter in the woods of Sundsvall, Sweden back in 1874, this 35% abv liqueur was created both as a shooter and drink ingredient, to enjoy during hunting, in a bar or in the safety of your own home.

Nose: Sweet, with hints of coca-cola, christmas spices and a touch of alcohol.
Mouth: Lots of sweetness to begin with, followed by an explosion of sappy butterscotch, cloves, hints of vanilla and a nice amount of heat from cinnamon and maybe also ginger as it fades out.

It's actually quite pleasant to sip on for a little while, with or without ice, but maybe too sweet to work as a substitute for Jägermeister and not spicy enough to compete with Fireball (two products which they might have been inspired by) - at least according to my taste. However, none of the flavours are overwhelming which means it's well balanced enough to work as a cocktail ingredient - and I think the cloves and cinnamon makes it especially suitable for tropical rum/tiki cocktails. I've been experimenting a bit, and finally came up with these two cocktail recipes below - enjoy! 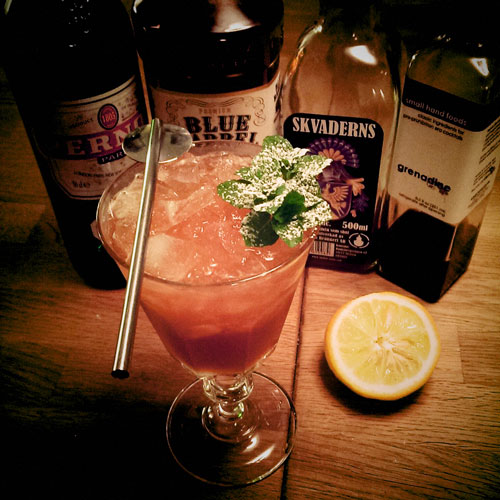 Shake with ice cubes, strain into a cocktail glass filled with crushed ice. Garnish with a mint sprig dusted with powdered sugar, serve with a straw. 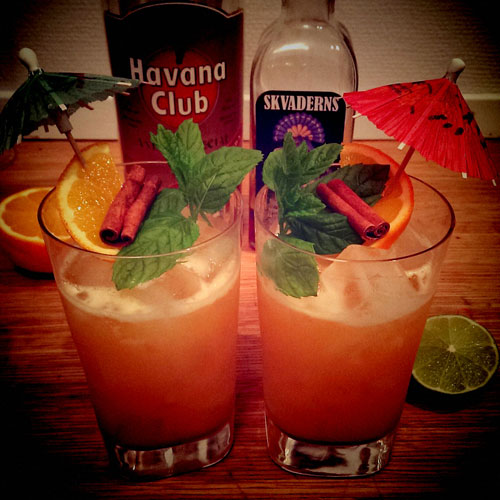