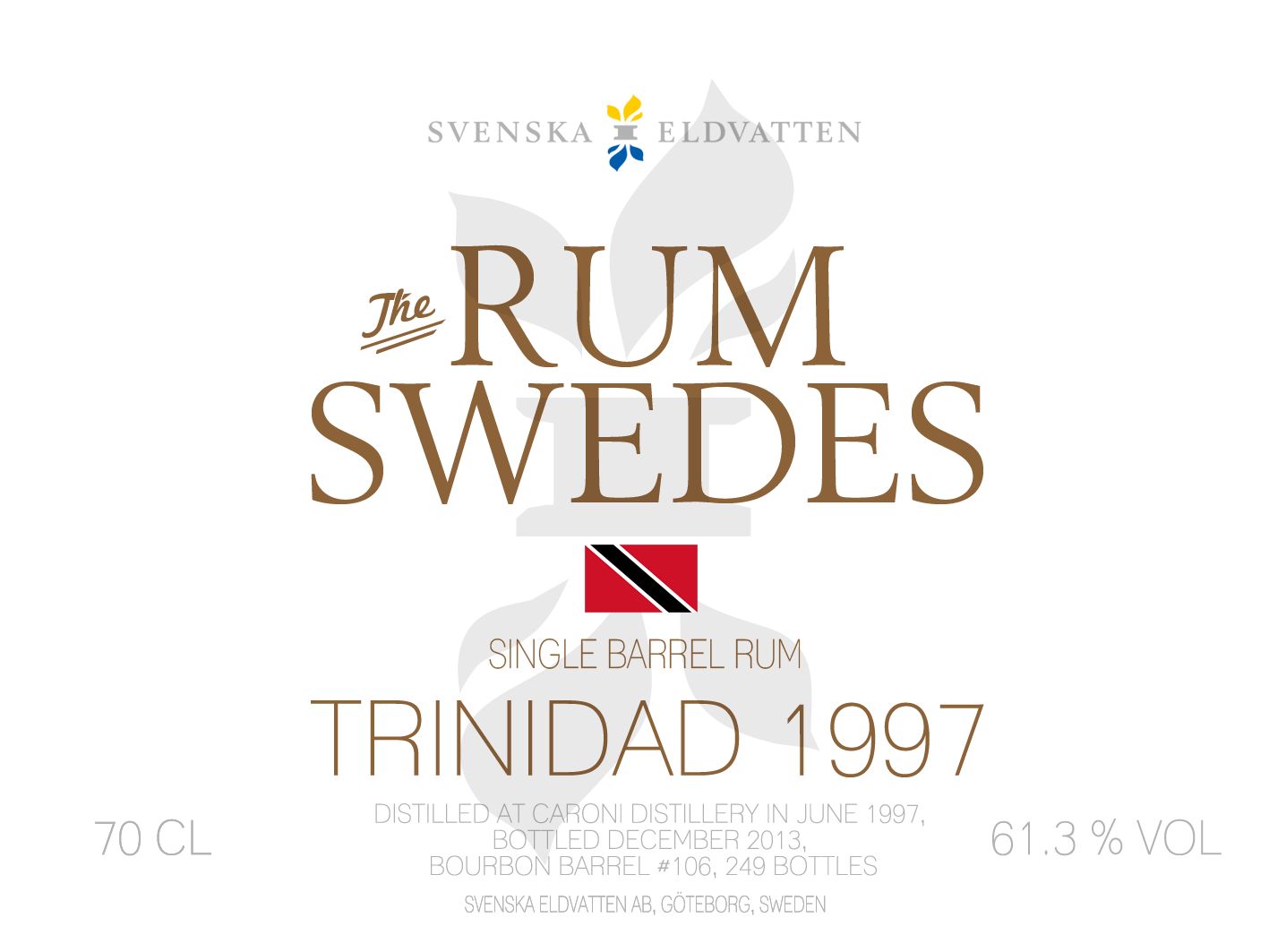 Hot on the heels of the previous Rum Swedes releases - Jamaica 2000 / Guyana 2003 and Barbados 2000 / Guyana 2002 - Swedish company Svenska Eldvatten has unleashed another potent and very exclusive rum in the same series, and it's nothing less than Trinidad 1997. Sourced from the same, now closed for business, distillery as their since long sold out Caroni 1997 release (which I unfortunately didn't get to try), they were both distilled in June 1997. This barrel (#106), which yielded 249 70 cl bottles, was bottled in December 2013 (13 months later than the first one) at 61,3% abv, and is according to Svenska Eldvatten even more heavy-bodied and flavourful - and who am I to question that?

Nose: Spicy and sweet, the pungency of arrack and burnt sugar is upfront, with the usual suspects vanilla and baking spices like cinnamon and cloves fighting for attention before it fades out with a little smokiness. Mouth: A lot fruitier than imagined, it's still got a dry and slightly bitter oak flavour to it yet dominated by ripe cherries and apricot together with a spicyness from chili and cinnamon and a healthy dose of sweetness from molasses and vanilla. Very rich and extremely satisfying neat or on the rocks, a real winner! So, how does it work in cocktails?

Sometimes there's nothing better than a Rum Old Fashioned (60 ml Rum Swedes Trinidad 1997, 2 dashes Angostura Bitters, 5 ml simple syrup, orange zest - stir all ingredients with ice until desired dilution, approximately 30 seconds, strain into ice-filled Old Fashioned glass and garnish with orange zest) and it's nothing less than phenomenal! The spices in the bitters accentuates the similar flavours of the rum in a great way, the fruity sweetness has become somewhat subdued by the dilution but still pleasantly present, and the 5 ml of simple syrup might be more than enough depending on your sweet tooth. 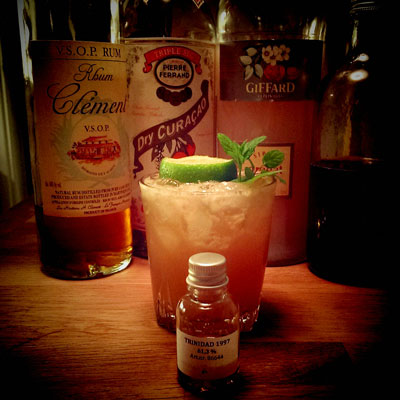 According to me, no aged rum review is complete without trying it out in a Mai Tai (30 ml Rum Swedes Trinidad 1997, 30 ml Rhum Clément VSOP, 30 ml lime juice, 15 ml Pierre Ferrand Dry Curacao, 7,5 ml simple syrup, 7,5 ml Giffard Orgeat - shake with crushed ice, pour unstrained into a double old fashioned-glass, garnish with spent lime shell and a sprig of mint) and it's a great tasting cocktail but not perfect, as there's a minor clash between the orgeat and the fruity cherry/apricot sweetness of the rum. Of course all rum can't be optimal for a Mai Tai, and this bottling is definitely better off on its own or in a drink which really makes it shine like the Rum Old Fashioned above.
Labels: drinks reviews spirits