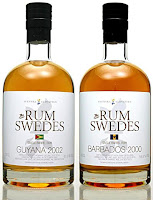 A while ago I reviewed the two first releases in the new Rum Swedes series by independent Swedish bottler Svenska Eldvatten based in Gothenburg. Both of them nice sipping rums, and they also worked very well in a Mai Tai - especially Guyana 2003 - however, considering the hefty price tag you might want to enjoy them neat or on the rocks.

Anyway, In the beginning of October Svenska Eldvatten were kind enough to release two more Rum Swedes: Barbados 2000 and Guyana 2002, and luckily for me I have been able to try them out as well.

First, we have the Barbados 2000, distilled at The West Indies Rum Distillery in June 2000 and bottled in July 2013 after having rested in a bourbon barrel which yielded 215 bottles à 700 ml at 58,8% ABV cask strength. 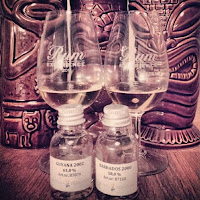 Nose: Rather subtle and sweet, with prominent molasses and arrack notes together with the usual suspects dried tropical fruit like figs and apricot and of course also some wood and vanilla from the barrel - and maybe a hint of pumpkin spice too. Mouth: Not as sweet as the nose suggests, the main flavours are still arrack and molasses with some nice vanilla and sweet liquorice and a mild yet slightly peppery, wooden finish with hints of chocolate.

Barbados 2000 is a very pleasant experience, but surprisingly light considering the amount of time it's been aged. It's well balanced, on the sweet side, yet complex enough to maintain my interest throughout - but how well does it perform in a Mai Tai (30 ml Rum Swedes Barbados 2000, 30 ml Rhum Clément VSOP, 30 ml lime juice, 15 ml Pierre Ferrand Dry Curacao, 7,5 ml simple syrup, 7,5 ml Giffard Orgeat - shake with crushed ice, pour unstrained into a double old fashioned-glass, garnish with spent lime shell and a sprig of mint)? Unfortunately, it's not powerful enough to shine in this drink, and the combination of rum and orgeat overpowers the rest of the ingredients in a strange way. Too bad... or maybe not, as it's still a great sipping rum and might work in other cocktails.

The Guyana 2002 is surprisingly lighter in colour than Svenska Eldvatten's 2003 release. It was distilled by Diamond Distillery in October 2002 and aged in a bourbon barrel until the bottling in June 2013. The yield was 245 bottles à 700 ml with a cask strength ABV of 61,0%.

Nose: Deep and pungent notes of arrack as I've come to expect from demerara rums, with a sweet fruitiness of ripe tropical fruit, vanilla and baking spices. Mouth: An explosion of heavy smoke, raisins, arrack, vanilla and oak, and rather spicy too! The deal is sealed with burnt sugar, cacao and a pleasant grassiness before it fades out with hints of vanilla and even more baking spices, especially cinnamon and cloves. Phew, this rum means business! Even before I had tried it, I knew that it would work wonders in a Mai Tai. And it's certainly the right kind of rum for the job - the heavy, pungent base together with the multi-layered top notes makes it a perfectly balanced drink in combination with the additional sweet and sour ingredients. I guess that the high ABV helps too... I can wholeheartedly endorse this excellent rum, both as a sipper and in rum cocktails that calls for demerara or similar rum - highly recommended (if you can afford it, that is...)!
Labels: drinks reviews spirits