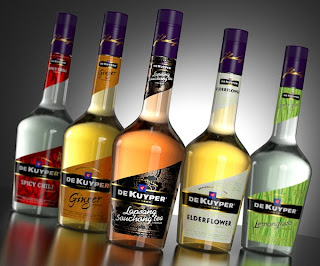 Dutch company De Kuyper has been around since the late 17th century, and is well known for its wide range of liqueurs. The last couple of years, bartenders around the world have been influenced by chefs and started infusing alcohol with lots of different exotic ingredients - and just recently De Kuyper updated its portfolio for the 21st century with the new range Exotique - including Spicy Chili, Ginger, Lapsang Souchong Tea, Elderflower and Lemongrass. Thanks to the Swedish importer Nigab, I've been able to evaluate them (except for Elderflower).

It's quite obvious that you shouldn't drink these products neat, as they're all awfully sweet. Both Lemongrass (24% abv) and Ginger (36% abv) are surprisingly discreet, while Lapsang Souchong Tea (24% abv) and Spicy Chili (35% abv) are very straightforward. Lemongrass has a vague, earthy and citrusy character; Ginger is somewhat spicy but I have a hard time actually tasting any ginger; Lapsang Souchong Tea tastes like a mix of smoke and sweet liqourice, Spicy Chili is rather savoury like a combination of chili and rice vinegar. 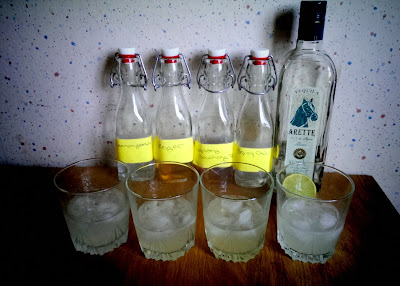 Even though it might not be fair, I decided to make the same cocktail with each liqueur to find out how they work in mixed drinks. My choice was the Picador/Margarita (2 parts Arette Blanco tequila, 1 part De Kuyper liqueur, 1 part lime juice - shake with ice cubes, pour unstrained into Old Fashioned-glass). Upon tasting, my first reaction was that neither of these liqueurs were actually sweet or powerful enough to substitute the original ingredient Cointreau. Also, the flavour of Lemongrass and Ginger were almost invisible, but with another ½ part liqueur added there was definitely more taste as well as a nice sweet/sour balance. Both Lapsang Souchong Tea and Spicy Chili almost overpowered the drink while also being too sour, but with an added ½ part of simple syrup both drinks worked surprisingly well.

All in all, De Kuyper's new line of Exotique liqueurs certainly could find its place in well stocked and adventurous bars, just be prepared to experiment a little before you get it right - especially Spicy Chili and Lapsang Souchong Tea can easily overpower any drink if you're not careful. Alas, I'm not overly convinced by any of these flavours, but at least they are an option if you're too lazy to make your own infusions. If I have to choose one favourite, it'd probably be Lemongrass, as it's fairly neutral and should be able to work in lots of different cocktails.
Labels: drinks liqueur research reviews