Lemon Hart 151 Demerara Rum is a legendary overproof rum from Guyana which has been around since the early 19th century, and is loved by rum enthusiasts in general and tiki aficionados in particular. In late 2009 it suddenly started to disappear from store shelves, and in early 2010 the brand was sold to Canadian company Mosaiq. People were afraid it would be discontinued and started buying all the odd bottles they could find, just in case. As Jeff "Beachbum" Berry put it: "...there’s no substitute for Lemon Hart 151" - and I also managed to find myself a bottle at Cask in San Francisco.

Shortly after their acquisition, Mosaiq revealed an updated Lemon Hart label design (registration required), but no news about the 151. Finally, in June 2011, Mosaiq relaunched Lemon Hart 151 with the new label design (registration required), and everyone was happy - until people seemed to notice that the rum tasted differently. Ed Hamilton of Ministry of Rum, who played a big part in bringing the rum back, recorded this video with rum expert Martin Cate, owner of Smuggler's Cove in San Francisco: 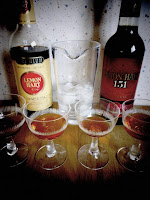 Still, I wanted to find out for myself, and when I scored a bottle with the new label design at Kierzek in Berlin, it was time for a tasting side by side. And, according to Tony Conigliaro's explanation (approximately 15 minutes in) about how water opens up the spirit by breaking down the ester chains and freeing the volatile aromatics, I decided to taste both at 151 and 48 proof (75,5 % and 24 % ABV). There's no doubt about it, the new bottling is still the rich, heavy, pungent and smoky rum with prominent notes of molasses and ripe tropical fruit that you have come to expect from and love with Lemon Hart 151. Still, after tasting over and over again I found the contents of the older bottle to be somewhat warmer and more full-bodied - and for that reason slightly preferrable.

To be sure I should trust my tastebuds, I decided to do a blind test with two classic tiki drinks which both calls for Lemon Hart 151 - 151 Swizzle (45 ml Lemon Hart 151, 15 ml fresh lime juice, 15 ml simple syrup, 6 drops Pernod, 1 dash Angostura Bitters - blend with crushed ice, garnish with nutmeg and cinnamon stick) and Mai Tai (the Lemon Hart 151 is in this case optional, but highly recommended) - and all drinks was of course delicious but the result was still the same - the old Lemon Hart 151 has got a little more depth, at least my bottle...

The difference is of course minimal, and I probably wouldn't have noticed any discrepancy at all if I hadn't tried both of them side by side. In conclusion, if you see a bottle with the old label in the liquor store, buy it before someone else does - but even if the new label artwork doesn't really live up to the iconic status of the Lemon Hart brand, there's definitely nothing wrong with what's inside!