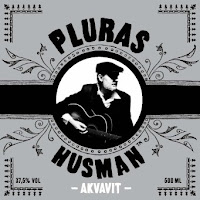 "Plura" Jonsson is one of Sweden's most beloved singer/songwriters, and lately he's also managed to become even more well known because of his cooking show on national television and a number of cookbooks - the latest being Pluras Husman featuring traditional Swedish food. In addition, he's also put his name on an akvavit, which is supposed to work well with the food in the book - preferrably as a shot on the side.

My initial thought about this product was that if you put a person like Plura on the label, you're aiming at a very wide target market. Hence, this akvavit should not be too rough around the edges, and Plura himself seems to confirm that in the press release - as he believes a good akvavit should be "fresh and uplifting and neither too smooth or too strong". Sounds typically Swedish in my opinion, not that there would be anything wrong with that...

As previously mentioned, akvavit is traditionally served cold and as a shot here in Sweden, so that's where I'll start.

Nose: mostly alcohol with a mild aroma of anise and caraway. Mouth: Surprisingly smooth and maybe a tad sweet, with a prominent taste of liquorice from the anise and fennel and a slightly spicy, herbal and bitter finish. In conclusion, not the most exciting akvavit - but it certainly has got some qualities which makes it rather enjoyable. The 37,5% ABV might make it approachable even to people who usually don't enjoy shots.

On to the mixed drinks! To make it simple and in line with the character of this akvavit, I decided to give it a go in two variations of classics...

Pluroni (30 ml Pluras Husman, 30 ml Martini Rosso, 30 ml Campari)
Even though the low ABV makes the akvavit rather invisible in this drink, the herbal notes mix well with the Campari and sweet vermouth.

Verdict
It's obviously an akvavit with notes of anise, fennel, caraway and other spices and herbs, yet it's neutral enough to work well both on its own and in at least two of the most popular drinks around. There are of course more refined and interesting akvavits on the market, but if you're looking for something not too strong and heavy, this might be worth a try.

Pluras Husman is available in the special order section of Systembolaget, it comes in a 500 ml bottle at the reasonable price of 229 SEK.
Labels: drinks reviews