Recently I was invited to Edrington's Stockholm office to meet Fred Noe, the current master distiller and seventh generation of the Jim Beam family distillery.

The afternoon started with a presentation of the company history, and Noe also told us how he was introduced to the family business and that he had to work his way up from the bottom after having finished college. Jim Beam Distillery certainly has come a long way since Jacob Boehm moved from Germany and sold his first barrel of whiskey on American soil in 1795, as it's now the largest producer of bourbon in Kentucky and also the world. The popularity of the spirit in general has increased a lot during the last couple of years, among other things it's certainly thanks to the huge recent interest in classic cocktails - and here in Sweden the bourbon sales went up with 16.2 percent in 2012. 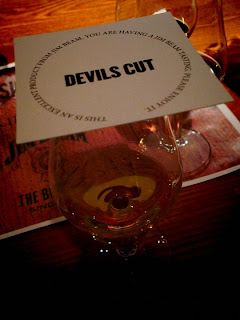 After the introduction, Fred walked us through a tasting of seven of their current products - Jim Beam White Dog, Jim Beam Rye, Jim Beam White, Jim Beam Black, Knob Creek, Jim Beam Honey - and perhaps the most intriguing of them all, - at least from a production point of view - Devil's Cut. I had only seen it in stores outside of Sweden, but never tried it, so I was very curious. Apparently, it's Fred's first product of his own, which he's obviously proud of - and the idea is pretty cool. Using a special technique they add water to the emptied barrels and shake them in order to get the last 2-3 gallons of bourbon inside the wood, which normally would be considered lost. This liquid is then mixed with regular Jim Beam, and the final result is rather unique. The name Devil's Cut is a nod to the term angels' share which is the amount of evaporated whiskey during maturation in the casks.

Nose: Very aromatic and complex, with vanilla, the sweetness of dried tropical fruit and lots of wood. Mouth: An initial spicy bite, then intense flavours of smoke, oak and a hint of maple syrup sweetness. It finishes off smoothly with some cinnamon spicyness and even more wood.

The flavours from the "devil's cut" make it a rather bold bourbon, and even though it's enjoyable on its own I think it might be more suitable for mixing. I would have loved to try Devil's Cut in some cocktails, as the taste is very promising, but unfortunately we weren't able to do that. To make things worse, it's not even available on the Swedish market at the moment. Anyway, to be honest there are better bourbons out there, for example the aforementioned Knob Creek, but Devil's Cut has an interesting flavour profile and definitely deserves some attention.
Labels: events reviews
Location: Luntmakargatan 46, 111 37 Stockholm, Sverige