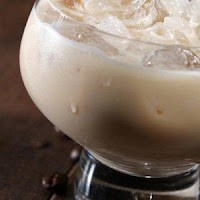 Don the Beachcomber's Zombie, created in 1934, is considered to be one of the first and most famous of the faux tropical drinks and has since then been bastardized in many different ways during the years. According to Charles H. Baker Jr., in his book The Gentleman's Companion (1939), there was another zombie cocktail, originated in Haiti in the early 1930s - and it's completely different from Don's creation. Even though I personally prefer Don's Zombie, this one is worth a try as well - and here's the recipe (I don't blame you if you cut down on the coconut...):

AN EXOTIC COCONUT-COGNAC COCKTAIL from CAP HAITIEN, REPUBLIC de HAITI, and which is CALLED the ZOMBIE

Put in shaker with lots of finely cracked ice, shake hard and turn ice and all - à la Daiquiri - into small, chilled goblets. Another variation, and a much better flavoured one we find, is found by using only two jiggers cognac, and one jigger old Haitian - or other medium dark - rum.

Enriched coconut milk: Get a ripe coconut anywhere. Bore two holes in eyes and drain out water into a container - being careful to strain out fibres or bits of shell. Crack open nut, cut up kernel, with brown part unremoved, into the mixer; turn in the coconut juice. Reduce to pulp at high speed for 1 minute, then rub through a very fine sieve, or strain through several thicknesses of cloth.
Labels: charles h. baker jr. don the beachcomber research zombie